How To Collect Insects

How to Collect
​One of the best ways to learn about insects is to collect them. You can learn much more about insects by collecting and handling them than by reading about them in books. You may decide to collect and release the insects after you catch them, or you may want to make a collection of preserved specimens. In either case, remember to treat each insect with respect and limit your catch.

Permits
In many locations, permits are required for collecting insects. Please check with local authorities (e.g. park managers) before collecting specimens.
Where and when to collect

Insects occur almost everywhere, so it takes only diligence to find them. A great diversity of insects can be found by looking in the following places.

* Under rocks and boards (remember to replace the rock or board after you have looked)
* On the leaves of plants, especially on the undersurface of leaves
* Visiting flowers or fruit
* At lights at night
* In the water, especially if there are lots of plants in the water
* At various sources of "bait" such as drops of honey or peanut butter

In general, bugs like warm weather rather than cool, and many prefer damp environments to dry ones (although they don't like the rain). To get the greatest number of insects for your collection, check a great variety of habitats, at different times of day, and during different times of year.

Insect collecting may be active or passive. Active collecting involves searching for insects in the environment, and is often used to get particular types of insects, or insects that are found on particular substrates or plants. Passive collection involves the use of traps or baits, and is less discriminating in the type of insect collected.
Collecting Equipment:

Insect Net
One of the most valuable pieces of equipment for studying insects is a net. A good net is one that is made of a mesh that is easy to see through, has a hoop and handle that are large enough to reach and catch the insects you would like to get, yet is not so large as to be difficult to handle. The length of the net bag should be long enough to fold completely across the hoop and still leave a pocket at the end where the insects are collected. 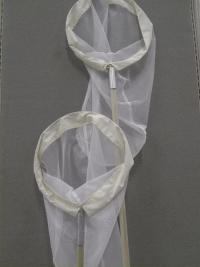 A net used for sweeping through dense vegetation should be made of a fine mesh so that it does not snag too easily, whereas a net used to sweep through the air (such as one used to catch butterflies or dragonflies) should be made of a coarse mesh so that it can move quickly without much air resistance. An entomologist may want to keep a variety of net bags on hand for various situations.

When collecting with a net, one may sweep through the air to catch a particular visible insect, or one may sweep through vegetation. The former requires some skill to catch the desired insect in flight, whereas the latter is simply a matter of swinging the net and catching whatever enters. When sweep netting through vegetation the bag should be emptied often to prevent damage to the specimens, especially by large pieces of plant material.

With either type of net collecting, one should take care to prevent the insects from escaping the net. One simple way is to fold the net over upon the rim of the hoop, with a flick of the wrist, quickly after sweeping (see drawing above). The insect (or insects) can then be grasped through the net (provided it is not a stinging insect) and transferred to a killing jar. If the insect is a stinging type, the insect may be folded into a portion of the net, and the entire fold may be stuffed into the killing jar until the insect is stunned, at which time it may be removed from the net and transferred to the jar. Insects may also be transferred to a killing jar by inserting the jar into the net. By holding the tip of the net up (because many insects move upward to escape) the lidless jar can be moved upward to trap the insect. The lid can then be worked onto the jar while still inside the net.

Aspirator
An aspirator is a useful device for catching small insects, especially those that rarely fly. Aspirators are used by sucking through a mouthpiece to draw small insects into a vial. Aspirators can be purchased at an entomological supply company. 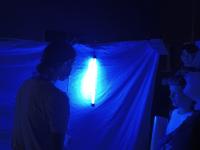 Beating Sheet
Many insects feign death by falling to the ground when disturbed. A beating sheet is used for catching such insects that fall off of vegetation. A piece of sturdy canvas, sometimes on a wooden or metal frame, is typically held or placed under a plant to collect the specimens. The plant is then shaken or hit with a stick, causing the insects to fall. The insects can be picked off of the sheet with forceps and transferred to a killing jar.

Light Trap
An outdoor light that is turned on at night is a good way to collect insects. Since many insects navigate by the moon, they get confused by bright lights and are attracted to them instead. Try hanging a white sheet or cloth near a porch light or backyard light. You will find that many different kinds of insects, especially moths, will land on the sheet. They can be collected off the sheet by hand or with a pair of tweezers. 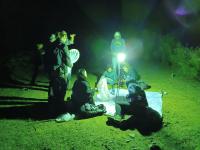 Pitfall Traps
Pitfall traps are used to collect insects that crawl along the surface of the ground. To make a pitfall trap, bury a plastic bowl (yellow or white seem to work best) up to the rim, so that the rim is level with the ground surface. Put enough water in the bowl to cover the bottom and put one drop of liquid soap in the water (to break the surface tension). Insects crawling over the surface of the ground will fall into the bowl and will be unable to climb out. Check the pitfall trap on a regular basis.

Tullgren Funnel
Collecting insects that live in soil or leaf litter can be quite tedious; however, by taking advantage of the fact that many of these insects are negatively phototaxic (avoid light) one may construct a simple mechanism to extract them. A Tullgren funnel is simply a large funnel (approx. 60 cm diameter at the widest point) with the narrow end inserted into a collecting jar. Some coarse wire mesh is placed inside the funnel; the mesh should be wide enough for insects to move through but coarse enough to support the soil or litter. The soil is then placed in the funnel (on the mesh), and a bright light is supported at the top of the funnel. The insects will move downward through the substrate to avoid the light (and heat) from above, and will eventually fall into the collecting jar.

Malaise Trap
Malaise Traps are simply barrier traps used to interrupt insect flight. They are sheets of netting with a "roof" at the top. Insects will fly into the netting, climb or fly upwards to escape, and be caught by the vaulted roof. There are typically one or two collecting jars at the highest point of the roof, into which the insect will crawl, but be unable to escape.

Here are some other tools that might be useful for collecting insects:
* A pair of tweezers or forceps for picking insects up
* A hand lens or magnifying glass
* Envelopes for holding butterflies, moths, and dragonflies (these insects are often too large for collection jars or may damage their wings if allowed to flap around)
* Trowel (for digging in dirt or leaf litter)
* Sieve or soil sifter

Making a killing jar
If you would like to create a collection, rather than just viewing and releasing the insects, you should also construct a killing jar. A killing jar is simply a jar or bottle in which you place a volatile chemical that poisons the air inside the bottle and quickly kills the insect. A simple killing jar can be made with a small jar or bottle (the size of a pill bottle is sufficient for most insects). Into this bottle put a small layer of plaster (such as Plaster of Paris that can be found in most craft stores) about ½ inch deep, and allow the plaster to cure (harden). Just before you want to use the jar, put a few drops of ethyl acetate, or acetone (nail polish remover) on the plaster. The fact that plaster is porous will allow the chemical to form a vapor inside the bottle, but won't allow the liquid chemical to puddle. Keep a bit of tissue in the jar also to absorb any excess moisture. Put your insects inside the jar and cap it tightly. You will have to "recharge" the killing jar with more acetone on a regular basis as you collect more insects.

Many insects can be killed by dropping them directly into 70-90% ethyl or isopropyl alcohol. It is best to start with a higher concentration of alcohol (i.e. 90%) because the insects themselves will dilute the total concentration of the solution once they are submerged. Insects stored in 70% alcohol can be stored indefinitely. For most soft-bodied or aquatic insects, this is the preferred method for long-term storage. We use Whirl-Pak bags for convenient storage and transport of alcohol preserved specimens.

If you are concerned about killing insects for your collection, remember this: insects often have short life spans and reproduce quickly, so collecting adult insects will have very little impact on the population as a whole. Never collect more insects than you need to, and be sure to take time to label, arrange and store specimens correctly.
Where to purchase equipment
Here are some companies that sell equipment for amateur entomologists:

Educational Science On-line Store (281) 554-9783 This store, based in League City, Texas, has lots of Entomological supplies and teaching materials. In addition to collecting and mounting equipment, you can purchase insect rearing kits and materials for other topics in science education. For insect collecting equipment, click on the link Entomology Supplies

Other sources of information:
Resourceful Entomology has guides on building insect drawers and other  entomological info

Short, useful, YouTube videos created by entomology students at UC Davis. Each video is less than 90 seconds, so you can watch it repeatedly.
Video Series on Insect Collection
1: Hand collecting
2: Using an aspirator
3: Ground collecting
4: Aquatic collecting
5: Using nets
6: How to kill insects
7: Pinning
8: How to point mount
9: Labeling
10: Spreading
11: Storage and display